Apartments in KR Puram Bangalore for Sale Below 1.3 Crores

Reviews for KR Puram, Bangalore East
Read what locals have to say...

Points to Consider
for KR Puram Location
What's great here!
KR Puram is a relatively affordable locality compared to areas situated along Outer Ring Road in East Bangalore
Rentals in KR Puram are comparatively affordable than neighbouring localities situated along Outer Ring Road
KR Puram is around 7-10 km away from commercial parks on ITPL Main Rd and Brookefield in Whitefield
The key roads serving KR Puram are Old Madras Rd, Outer Ring Rd, Devasandra Main Rd, and Seegahelli Main Rd
Old Madras Road has many retail outlets and popular shops for retail needs of KR Puram residents
To meet the increasing demand, BBMP has increased the supply of water to KR Puram
Authorities have laid water supply pipelines and underground drainage pipelines in parts of KR Puram
Repair work has been done on the Ramamurthynagar underpass and Horamavu Main Rd, which connect KR Puram with Hebbal
KR Puram is 13-16 km away from the commercial hubs in Adarsh Palm Retreat and along the Outer Ring Road
KR Puram is 30.4 km away from the commercial hub of Electronic City
The closest metro station to KR Puram is Swami Vivekananda Metro Station, which is 7.5 km away
KR Puram is about 15 km away from Sarjapur Road
BBMP has created a 30-metre buffer area around the City's lakes, restricting construction near KR Puram Lake
The Bommasandra Industrial Area in Electronic City is 31.6 km away from KR Puram
The Kempegowda International Airport serves KR Puram and is 34.4 km away
The KR Puram Railway Station (Chennai Central-Bangalore City Line) is situated near KR Puram Flyover
Popular parks near the Tin Factory Junction in KR Puram are Hanuman Park and Sadanandanagar Park
Old Madras Rd is dotted with bank branches and ATMs
Authorities have been laying water supply pipelines in TC Palya and nearby areas. Still, many people use water tankers
BBMP cleared the encroachments on footpaths of Old Madras Road and Tin Factory Junction-KR Puram Railway Station
Top schools in KR Puram are the New Indus Valley Residential School and Diya Academy of Learning
Top hospitals in KR Puram include Deepa Hospital and Sri Ram Hospital
Top malls near KR Puram include Phoenix Marketcity (5.5 km) and Inorbit Mall Whitefield (8 km)
What needs attention!
Cases of unscheduled power cuts in parts of KR Puram have been reported
Many parts of KR Puram get inadequate water supply
KR Puram Flyover sees heavy traffic jams
There is a general lack of street lights in KR Puram and adjacent areas
There is a lack of sewerage networks in some parts of KR Puram
A few slum settlements in KR Puram have been adversely affecting the demand for residences
Design changes and land acquisition issues are causing delays in Byappanahalli-Whitefield via KR Puram metro corridor
The underpass near KR Puram Railway Station witnesses regular traffic snarls
The Doddanekundi underpass, used to commute between KR Puram and Marathahalli, is prone to waterlogging
Fabric-dyeing industrial units dumping effluents into KR Puram Lake has become a health hazard for nearby residents
Tin Factory Junction, used for commuting to and from KR Puram, Indira Nagar and Hebbal, sees regular traffic snarls
Cases of waterlogging on the stretch of Old Madras Rd near Benniganahalli owing to un-silted drains have been reported
Cases of waterlogging owing to blocked roadside drains have been reported in Tin Factory Junction near KR Puram
Cases of encroachment over storm water drains have been reported in KR Puram
Cases of drainage water overflowing on roads due to blocked drains have been reported in Coconut Garden Layout
Several roads are damaged in Coconut Garden Layout within KR Puram
Veerannapalya Flyover on Outer Ring Rd stretch between Hebbal and KR Puram has several potholes
Traffic snarls on TC Palya Main Rd (by-pass that connects with Old Madras Rd) owing to damages have been reported
Exposed live wires create a safety hazard during monsoons in parts of KR Puram
Numerous potholes have been reported on KR Puram Flyover and Sirsi Circle Flyover (towards Banashankari)
Cases of encroachment and illegal dumping of debris around Yele Mallappa Shetty Lake in KR Puram have been reported
The KR Puram Constituency, which majorly consists of KR Puram and adjacent areas, lacks green spaces
Cases of thefts have been reported in Ashraya Layout and nearby areas in KR Puram
Un-asphalted patches on Outer Ring Rd stretch from Hebbal Junction to Tin Factory cause inconvenience to commuters
Large amounts of garbage is being dumped under KR Puram Flyover and Tin Factory Signal
Road stretch between KR Puram and Garudachar Palya is damaged
The planned skywalk in Benniganahalli near Old Madras Rd stands delayed
Common Mentions
Based on 246 reviews
Positive Mentions
Good Public Transport
Easy Cab/Auto Availability
Markets at a walkable distance
Good Schools are nearby
Good Hospitals are nearby
Metro Connectivity nearby
Negative Mentions
Frequent Traffic Jams
High Pollution
Read Points to consider 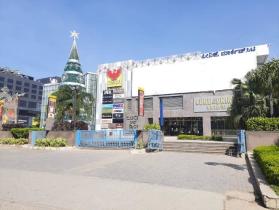 It's people friendly and near to ma

ny of the IT companies . It a has very brilliant weather and climate. The shopping mall is just around 1 km by walkable distance is short route . Grocery store and marts are many and has sufficient goods . Clothing shops have affordable and good quality colthes. Auto, ola and uber are easily available hereShow More
Nehashree V T, Owner of Property | Posted 2 months ago
3.7
★

KR puram is on a national highway,

thus has a very good connectivity , it connects kolar,hoskote and many other major cities to Bengaluru,thus it is very important.. Streets are good with street lights ,schools nearby are very good and are suitable for all classes of people. Transport and connectivity is very good ..Show More
Owner of Property | Posted 21 days ago
4.7
★

All the facilities are there, Marke

t is near by, shop's of Groceries and Meat shop's near by as well also we have biggest mall Phoenix Mall is within 4km range, road's are good and it's very easy find Uber Ola cabs. It's very safe during night and police vehicles will be patrolling at night. Park's is near by and we have many tree's surrounding K R Puram so it's one of the best locality to stay with greener Bangalore.Show More
Shamsheya Anjum, Tenant | Posted 3 months ago
4
★

The area is safe as there is police

station within 2 kms. Vegetable shops and grocery shops are at walkable distance. The roads are well lit and well maintained. There is Ulsoor lake within 3kms. There are good schools like st. Germain high school , st.johns high school, st Xavier's high school all within 4 kms radius. There are supermarkets and there is no difficulty for public mode of transportation buses flie frequently. Cabs and autorickshaw are always available. Mg metro station is at 3 kms distance. And also manjushree hospital is at 2 kms distance. Show More
Tejas , Tenant | Posted 3 months ago
4.6
★

good environment like this city, in this city we have schools,colleges,hostels,rental houses, and hospitals,stadium,banks(state bank of India, axis bank etc),water tanks, cinema theatre, bike showrooms, different types of industries, temples(siva temple, baba temple, durga temple etc). In this city we have all facilities Show More
Lakshmi, Tenant | Posted 3 months ago
4.7
★

K R puram is a good locality to li

ve near by since schools, super market, malls, metro station, market, bus stand, railway station are all in a close vicinity. The price of the place here will skyrocket in the coming years so people who own a piece of land here are the luckiest. Over all it's a well educated locality we don't often see fights or violence activities on the road . It's a peaceful locality.Show More
Tenant | Posted 4 months ago
4.4
★

This locality is provided with best

✅ Are there other localities near KR Puram offering apartments for sale?

✅ Are there any ready to move apartments available in KR Puram?

Yes, there are 7+ ready to move apartments in KR Puram. Explore all on 99acres.com. Sort your search results using important parameters like price and date of posting.
Q

✅ Are there any affordable residential apartments to buy in KR Puram?

✅ Which society apartments are available in KR Puram?

There are many society apartments in KR Puram. Get a complete list of all of them on 99acres.
Q

✅ What are the new residential projects in KR Puram?

New projects are a crucial part of Bangalore real estate. Find the complete list of residential projects in KR Puram on 99acres.
Q

✅ What are the new launches in KR Puram?