Residential enquiries in Mumbai improved amid the stamp duty cut by one percent. The applicable stamp duty in Mumbai is five percent from April 1, 2020, onwards until the end of the fiscal year 2022.

Approvals to the Coastal Road project and Kalyan-Belapur Highway, coupled with the expeditious development on Colaba-SEEPZ metro corridor may upturn the realty sentiment in Mumbai. Besides, the allotment of Rs 550 crore for transport infrastructure would also imbue real estate growth in the city alongside improving connectivity.

Single window clearance on the cards

The number of redevelopment projects in Mumbai declined by 50 percent in the last one year on account of higher premiums and development charges levied by the Brihanmumbai Municipal Corporation (BMC). The slowdown in the residential market has made these formerly profitable projects, no longer viable for builders.

The outbreak of Coronavirus impaired large commercial transactions as two deals of about 5 lakh sq ft of office space were postponed in March.

Many companies from Bandra-Kurla Complex (BKC), Nariman Point and Andheri were seen shifting their offices to the Thane-Belapur Belt, including Brookfield that rented a 30,000 sq ft of office in L&T Towers. JW Marriott also leased four floors in Rupa Renaissance’s 18 lakh sq ft of new office space in Turbhe.

Infrastructure expansions and stamp duty reduction triggered a growth in the residential enquiries in Mumbai in Jan-Mar 2020. However, the quarterly conversions plummeted by 20-25 percent amid the COVID-19 crisis. With the extended phase of self-isolation, stalled construction activities, and liquidity crunch in the market, housing transactions came to a halt. Around 10-15 percent deals were called-off after the payment of the token amount.

Majority of the new launches in the quarter were small-sized projects by Category B developers. Grade A builders adopted a wait-and-watch approach and deferred the announcements planned ahead of Gudi Padwa to the upcoming months.

While yearly rentals in Navi Mumbai and Mumbai grew by three percent each, Thane clocked a two percent growth, YoY. While the residential market bore the maximum brunt amid the epidemic slowdown, the Government’s intervention to provide relief to businesses and buyers indicate at a revival in the near-term, depending on how soon India contains the novel Coronavirus.

Property sales in Navi Mumbai improved by 15 percent in the first two months of Jan-Mar 2020 and stood at 1,500 units. New launches also surged with the addition of 1,200 odd units. However, March suffered a setback post the Coronavirus outbreak.

Taloja, Ulwe and Panvel continued to be popular among price-sensitive buyers with average ‘asks’ ranging from Rs 5,500-7,500 per sq ft. Kharghar, too, gained traction due to improved supply of mid-sized 2 BHK units. Altogether, these locales captured around 70 percent of the demand share. The well-connected pockets of Airoli, Sanpada and Vashi also saw traction, primarily in the resale segment.

Khandeshwar and Palm Beach led the capital charts with three percent growth in the average ‘asks’, each, QoQ. While Khandeshwar leveraged on its proximity to Panvel, Kamothe and Mumbai Harbour Line, prices in the upscale market of Palm Beach surged owing to the demand-supply disequilibrium and nearness to the commercial hubs of Belapur and Nerul.

Around 25 projects, including phased launches, were added in Karanjade, Kharghar, Ulwe, and Taloja. Maximum launches were G+4 and G+7 structures by Category B developers. Grade A builders deferred their business expansion plans to upcoming months.

Inventory overhang in Navi Mumbai at the end of JanMar 2020 stood at around 25,000 units. It might take the city around 12 quarters to dispose of the housing stock. Kharghar, Panvel, Taloja and Ulwe constituted around 70 percent of the unsold inventory.

Average rentals in Navi Mumbai grew by three percent, YoY. Seawoods, Roadpali and Kamothe spearheaded the market with a nine percent hike in the annual rentals, each. While Seawoods thrived on a multitude of facilities, Roadpali and Kamothe benefitted on account of varied housing options and affordable monthly rentals, i.e. Rs 12-15 per sq ft.

Thane reported the sale of around 1,500 units in the first quarter of 2020 with under-construction units capturing the maximum share, especially in the resale market. Inventory supply also improved in the same period; however, the extended spell of social distancing blew things out of proportion towards the quarter-end. Consequently, a mere 1,200 units were added to Thane in Jan-Mar 2020.

While properties priced within Rs 35-65 lakh remained popular in Dombivli, Kalyan and Badlapur, mid-sized units pegged at Rs 80 lakh to Rs 1.2 crore received the maximum share of enquiries in Ghodbunder Road and Kolshet Road. In the resale segment, Waghbil, Naupada and Kasarvadavali were the preferred choices of homebuyers.

Bhiwandi, Neral and Kapurbawadi steered the capital market with three percent growth, each, in the ‘ask’ rates, QoQ. While robust connectivity and easy access to High Street Mall abetted the price hike in centrally-located Kapurbawadi, the continued focus of homebuyers on affordable pockets boosted the sentiment in Neral and Bhiwandi. Average ‘asks’ in these areas hovered between Rs 3,000 sq ft and Rs 5,000 per sq ft.

Unsold inventory in Thane at the quarter-end stood at 27,000 units with around 14 quarters required to dispose of the existing stock. About 70 percent of the inventory was in Majiwada, Ghodbunder Road, Ambernath and Kalyan.

Average rentals in Thane grew by two percent, YoY. Kalwa, Panch Pakhadi, and Kasarvadavali were the prime gainers with 7-8 percent growth in the annual rents. While hasslefree connectivity via Ghodbunder Road and augmented supply of projects with Occupancy Certificates (OC) buoyed the rentals in Kasarvadavali; Kalwa and Panch Pakhadi located in the heart of Thane continued gaining traction due to their strategic locations.

With a 25-30 percent dip, housing sales in Mumbai stood at 3,000 units in Jan-Mar 2020. Despite improved housing supply in Rs 40-60 lakh budget segment, the macro-economic factors impacted the quarterly conversions. The unsold stock in Mumbai in the period ending March 2020 stood at 70,000 units. 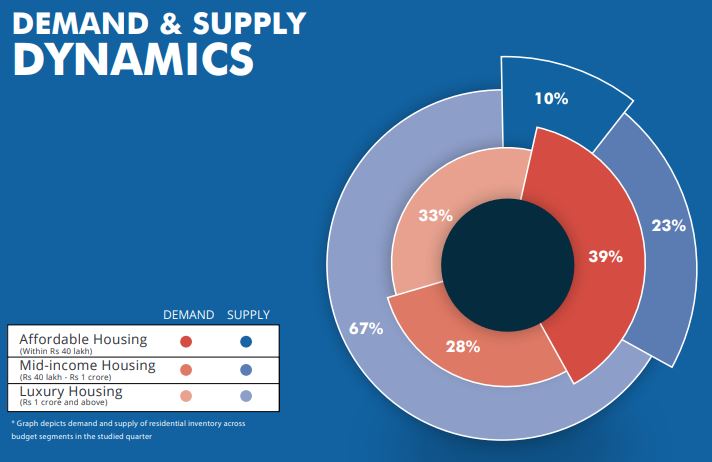 Nearly 60 percent of the total housing deals in Mumbai were recorded in the affordable areas of Mira Road and Beyond, Wadala and Naigaon. Resale units in the price range of Rs 1-2 crore also witnessed increased enquiries, especially in Goregaon, Kandivali West and Malad. However, conversions remained muted on account of exorbitant property prices. Developers hopeful of better sales ahead of Gudi Padwa announced multiple projects in Malad, Goregaon, Naigaon, Andheri, Wadala and Mira Road. Nearly 4,200 units were added in the reviewed quarter. Of these, 3,200 units were primary additions, i.e. newly launched.

Vile Parle West and Vikhroli East led the popularity graph with three percent quarterly hike, each, in the average capital values. While proximity to the International Airport and Bandra-Kurla Complex (BKC) attracted homebuyers to Vile Parle, prices in Vikhroli East grew on the back of metro expansion from Swami Samarth Nagar to Vikhroli.

Rental growth in Mumbai averaged at three percent, YoY. Four Bungalows, Vasai and Thakur Village emerged as the bellwethers with nine percent hike in the annual rents, each. While Four Bungalows gained from the spillover demand from Juhu and adequate supply of 1 BHK and 2 BHK configurations, Vasai remained attractive due to its lower rentals, i.e. Rs 13 per sq ft. Besides, Thakur Village benefitted due to its proximity to the Western Express Highway (WEH), Kandivali Railway Line, Nirlon Knowledge Park and BKC.

Despite builders slashing the property prices by 10-15 percent and property agents curtailing the brokerages by 20-30 percent, housing sales in Mumbai declined in the review period. The global COVID-19 pandemic and the resultant slowdown severely hit the sector ahead of the festive period. Nevertheless, developers are aiming to leverage digital platforms via extensive marketing strategies and virtual property tours to attract prospective homebuyers. Currently, their prime focus is on generating leads for future sales. 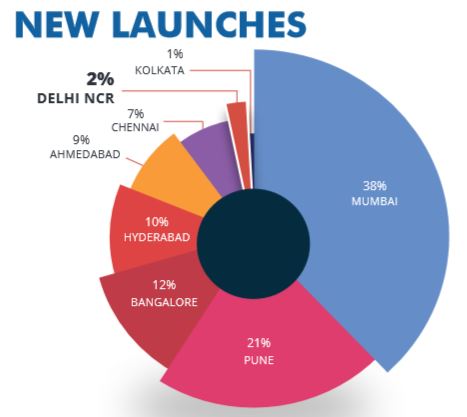