Kolkata: Sealdah-Sector V metro corridor to be ready by 2021-end

The stretch between Sealdah and Sector V on the East-West metro corridor in Kolkata is expected to commence operations by 2021-end. Currently, only one stretch on the planned corridor is operational, i.e. Sector V to Phoolbagan.

The East-West Metro corridor in Kolkata that is a long-awaited project would see the completion of a part of its stretch by December 2021. As per the recent update, the metro corridor between Sealdah and Sector V would be ready for operations by the year-end. The groundwork on the stretch started in 2019; however, its progress delayed by six months after a machine hit an aquifer.

In the North-South corridor, the trains should run up to Dakshineswar by February-end. Presently, a few trials are pending. Once the trials and CRS inspection are complete, metro services till Dakshineshwar will commence and benefit thousands of office-goers from Dunlop, Bonhooghly, Belghoria and other areas on the northern fringes. 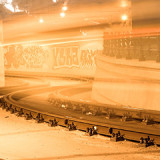