The registration under West Bengal HIRA has doubled in the last one year from 61,000 to 1.23 lakh housing units. The city recorded maximum property registrations under the Act from localities such as North and South 24 Parganas, Hooghly, Siliguri, Howrah, and Burdwan.

Consisting of six stations, the first phase of East-West Metro line commenced operations from Salt Lake Sector V to the Stadium. The platforms on this corridor are equipped with screen doors to prevent accidents.

Infrastructure projects in the pipeline

The civic body has decided to finalise the alignment plan for a flyover between Chingrighata and New Town. Another flyover from Captain Bheri on EM Bypass to Salt Lake Sector V and a hi-tech link plan from New Town’s Action Area III to Action Area I were proposed to improve the connectivity of the locales.

No tax arrears for new buyers

The civic body has planned to crack a whip on errant builders who are giving possession to buyers without paying tax dues. The move will offload undue tax burden on new buyers. Moreover, the authority has also planned to withhold the Occupancy Certificate until developers deliver all promised services in the project.

The authority has mandated to install fire-service kiosk on the ground floor of all new high-rises measuring above 45 meters in height or having a floor area of over two lakh sq. ft. The rule is also applicable for AC-equipped educational institutions, auditorium with a capacity of over 500 people, and basement parking.

The year 2020 started with the renewed interest of homebuyers. The city saw an upsurge in enquiries and a healthy sales volume within Rs 40 lakh from Rajarhat, New Town and the prime localities of South Kolkata.

In a continued attempt to offload the existing inventory, builders curtailed project launches in January 2020.However, a volatile stock market, followed by COVID-19 outbreak, put new launches on the backburner. About 200 housing units from Category B and C developers were added to the city, recording a dip of 30 percent, QoQ. With steady sales and limited launches, unsold inventory stood at about 35,000 housing units in Kolkata.

Property prices maintained status quo in Jan–Mar 2020 over the previous quarter. Nearly 45 percent of the tracked localities reported either a dip or stagnancy in property prices, QoQ. The average rental values, on the other hand, recorded a hike of two percent this quarter versus the same quarter last year.

Starting the second week of March 2020, site visits came to a halt in the wake of the COVID-19 crisis. Construction activities, too, were grounded due to the nationwide lockdown. Resultantly, developers urged the State government to announce COVID-19 as “Force Majeure”, with an aim to extend the deadline to deliver projects by six months. In contrast to the previous anticipation of new launches around Bengali New Year, developers may now hold the projects until the next 2-3 quarters. 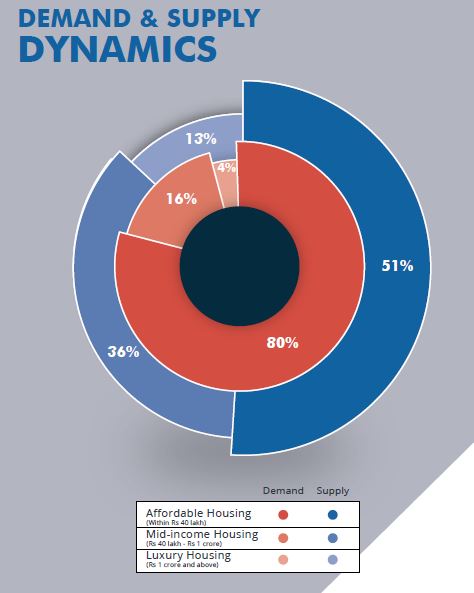 More than half of the housing demand in Kolkata is for properties priced within Rs 25 lakh, recording a hike of three percent, QoQ. An oversupply of about 25 percent in the premium and ultra-premium budget segments, i.e. Rs 60 lakh – Rs 1 crore and above, kept the segment vying for takers. Not surprisingly, New Town, Rajarhat and the key areas of South Kolkata remained the hotspots for potential homebuyers, accounting for nearly 70 percent of the sale enquiries. With fence-sitters entering the market in the first two months of the studied quarter, the city offloaded some of its existing inventory, which stands at about 35,000 units in the quarter ending March 2020.

The East-West Metro corridor between Salt Lake V and the Stadium became partially operational. The opening of the Phoolbagaan metro route is expected to improve liveability and property prices in Phoolbagaan and its neighbouring areas such as Kankurgachi, CIT Road and Narkeldanga.

The posh localities of Kolkata such as Tollygunge and Narendrapur reported a massive nine percent hike in rental rates, YoY. Other northern and southern localities, such as Lake Town, Mukundapur, Ballygunge, Gariahat, Kalikapur, Patuli, Madhyamgram, Kasba and Salt Lake, recorded a rental growth of 6-8 percent, each, YoY.

Due to cheaper property rates and higher demand amongst the tenant community, Kestopur and Bansdroni recorded the maximum rental yield of five percent, each, YoY.

Volatility in the stock market, followed by the outbreak of COVID-19, severely impacted the homebuying sentiment in Kolkata. Both site visits and construction activities came to a grinding halt following the nationwide lockdown. Ongoing projects are likely to struggle the most due to challenges with cash flow management in the ensuing quarters. The builders with strong balance sheets would be best prepared to weather the storm. On the other hand, many people are fearing job losses due to an overall economic slowdown and may take a cautious stance towards finalising their home purchase decision. Furthermore, various infrastructure projects across the city, such as demolition of Tala Bridge and opening of Majerhat Bridge, are expected to be delayed by a few months or quarters, depending on how soon the country handles the ongoing global health crisis 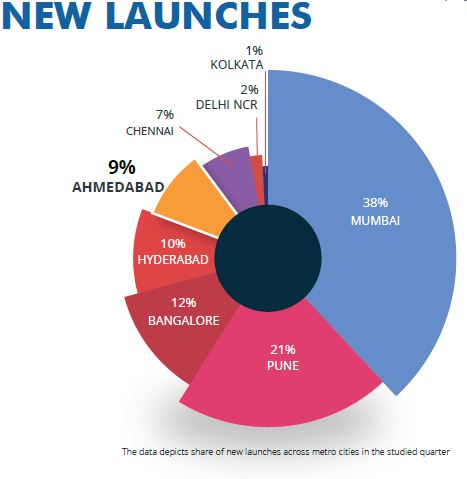