99ACRES' OUTLOOK
The last quarter of 2019 depicted the cautious stance of both developers and homebuyers in Delhi NCR. The city saw an addition of nearly 5,700 housing units across zones this quarter, against the launch of around 11,500 units (20 projects) in Jul-Sep 2019. This translates into a dip of 55 percent in new launches, QoQ. The better part of the story is that close to 60 percent of the newly added units are affordably priced within Rs 45 lakh - the most preferred budget category in city. 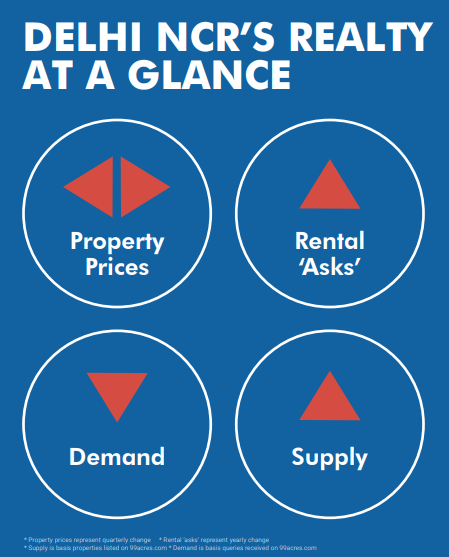 Going by the past trend, housing sales, too, happened in areas offering low-cost inventory. Greater Noida and Noida took the lead with the offtake of almost 3,200 and 1,300 housing units, respectively. There is a sharp 22 percent decline in sales, QoQ; however, the yearly outlook seems less pronounced with a 13 percent dip when compared with Oct-Dec 2018 sales figures. Gurgaon and Ghaziabad recorded the sale of about 2,700 and 1,700 units, respectively, reporting a decline of 25 percent and 20 percent in sales volume, QoQ.

Restricted number of new launches amid dipping sales helped the city shrink its vast unsold inventory, albeit by a measly two percent, QoQ. The unsold stock in Delhi NCR now stands at around 1.77 lakh housing units, which is seven percent lower than what the city held a year ago in Oct-Dec 2018.
Not surprisingly, the average weighted property prices in the city did not alter, QoQ. Sellers and developers continue to look forward to sentiment-uplifting policy changes before they upsurge the ‘ask’ rates, which is unlikely in the quarters to come.
NOIDA/GREATER NOIDA/GHAZIABAD
With nearly 67,800 units lying unsold at the beginning of Oct-Dec 2019, Noida and Greater Noida held almost 40 percent of the unsold inventory in Delhi NCR. The growing number of insolvency cases left the fate of thousands of units uncertain. The one-month-long construction ban made matters worse for the twin cities, which hold over 1.40 lakh delayed or stalled housing units. The only respite was the usurping of almost 11,250 housing units by National Building Construction Corporation (NBCC), and the conscious cut down in new unit launches. The cities reported the launch of just five housing projects in Q4 2019.

A spurt in sales during the festive season was largely due to weak prices and not necessarily a revival. The markets continued to survive on end-users seeking completed projects. While a few under-construction projects from reputed developers saw a spike in enquiries, only a margin of them converted into sales. Investor interest gained steam post a few developments on the Jewar Airport project; however, any transactions on this ground seem unlikely in the short-term. Sector-150, Noida, may reap maximum benefit due to its strategic location along the Yamuna Expressway. The locale clocked a three percent uptick in average property prices, QoQ.
Overall, the average weighted capital prices in Noida and Greater Noida region remained unchanged, QoQ. The rental market in the twin cities thrived with a two percent uptick in average ‘asks’. Sectors 93, 150 and 151 took the lead with a hike of 3-4 percent in average rentals, YoY.

Ghaziabad, too, succumbed to the rising economic crisis and reported declining property sales. Raj Nagar Extension, one of the best performing micro-markets in Ghaziabad, saw a 40 percent dip in sales this quarter. Property ‘asks’, however, went uphill by two percent, QoQ.

The festive month of October spelled increased enquiries and sales in the residential market of Gurgaon. The sales volume, however, dipped in the subsequent months. The under-construction segment seemed to be regaining its popularity due to its pricing advantage over ready units. Buyers, however, stuck to purchasing under-construction units from only established developers with a track record of timely project deliveries. A few ongoing projects along Sohna Road and in New Gurgaon, therefore, gained traction this quarter.

Despite holding an unsold inventory of around 56,000 units, new launches in Gurgaon went uphill from five in Jul-Sep 2019 to about 10 this quarter, capturing close to 60 percent of the total new residential launches in Delhi NCR in this period. These were mostly relaunched projects with the majority located in New Gurgaon and a few along the Dwarka Expressway. The two regions are touted to emerge as the most flourishing micro-markets in 2020 for both buying and renting as several projects are nearing possession. A few areas to watch out for include Sectors 81, 86, 90, and 92 in New Gurgaon, and Sectors 109, 111, and 113 along the Dwarka Expressway. The areas clocked a 2-3 percent hike in capital asks, QoQ, and rental ‘asks’, YoY.

The capital city observed status-quo in property enquiries and sales volume, QoQ. Sales largely restricted to affordable pockets or those linked or planned-to-belinked to the Delhi Metro. Property prices, too, remained unchanged in Oct-Dec 2019 against the previous quarter. The areas which displayed some positive price movement, QoQ, include Mayur Vihar II, Malviya Nagar and Lajpat Nagar II, all connected by the Delhi Metro.

Unlike the previous quarters, Dwarka, too, failed to report price growth as sales and enquiries did not witness any upward alterations. The locales which saw prices going up, albeit by a margin, included Sectors 8, 10 and 18. The rental market continued headstrong as over 40 percent of the micro-markets reported a surge in rental ‘asks’ by 6-9 percent between Oct-Dec 2019 and the same quarter last year.

Delhi saw the entry of two Pan-India developers – Godrej and Risland launching premium projects in South Delhi. While premium properties have been struggling for buyers in the city for long, projects by these developers drew exceptional demand. The shift seems momentary and project-specific, and does not necessarily hint at a revival in the luxury housing segment in Delhi.

The disparity in demand and supply of affordable housing seemed evident in the sudied quarter. A price correction of Government-owned projects in Narela seemed to have benefitted the market, which reported a four percent uptick, QoQ. The approval of an institutional hub at Narela may also have spiked buyer sentiment in the region.

Connectivity continued to be the prime growth driver for Delhi. The commencement of the construction work for Delhi Metro Phase IV promised sectoral growth in the short-to-mid-term. Three routes are being developed under this phase, including Janakpuri West-RK Ashram Marg (28.9 km), Aerocity-Tughlaqabad (20.2 km) and Majlis ParkMaujpur (12.5 km).

With 2.81 lakh stalled or delayed housing units (60 percent of the total units stalled across top eight metro cities), and an unsold inventory of 1.77 lakh housing units, the growth of Delhi NCR’s residential segment stood in a limbo in Oct-Dec 2019. Growing number of insolvency cases marred home buying sentiment, hitting sales dearly. Affordable pockets of Noida, Greater Noida and Gurgaon garnered maximum buyer traction. Any fillip to the stalled projects may boost consumer sentiment in the subsequent quarters. Infrastructure expansion, too, holds the baton to improved housing sales in the long-run. 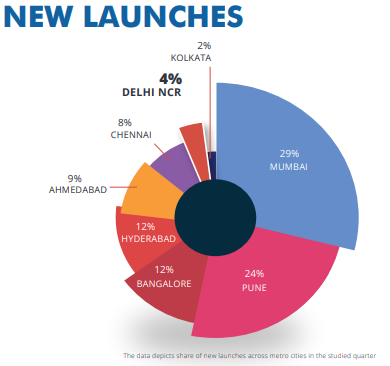