The revival of residential realty in the preceding quarters failed to set the pace of sales in the studied quarter in Delhi NCR. While buyer sentiment improved in Jul-Sep 2019 on the back of implementation of key infrastructure projects and Real Estate (Regulation and Development) Act (RERA), the risk-averse buyers were seen exercising caution amid a slowdown in the economy. Property sales dipped by 15 percent, QoQ, signaling a grim festive quarter. While Delhi and Gurgaon reported a marginal uptick of a percent in average prices, QoQ, Noida, Greater Noida and Ghaziabad saw prices and property sales plateauing. Incidents of more developers going insolvent dampened buyer trust in the market.

Cumulatively, Delhi NCR witnessed an addition of about 20 new projects in Q3 2019. Surprisingly, Faridabad took the lead, followed by Gurgaon and Greater Noida. Developers focused on mid-segment and premium housing units. The affordable housing segment stood in a paradoxical state as the Government and developers struggled to dispose of their low-cost inventory.

Delhi NCR continued to hold about 70 percent of the unsold inventory across metro cities, amounting to about two lakh housing units. Stalled residential projects, especially in Noida and Greater Noida, remained a pain point. With the Central Government aiming to revive the Public Sector Banks by providing about Rs 1 lakh crore to housing finance companies, there is a good chance at a flipping market scenario in the forthcoming quarters. The move may auger especially well for the two lakh stuck realty units in the region.

Property sales in Noida and Greater Noida dipped by over 50 percent, QoQ. Resultantly, the average weighted capital prices in the two regions failed to see any growth. Only select ready projects reported an uptick in values, albeit minimal. Currently, Noida and Greater Noida account for nearly 2.5 lakh vacant housing units, bearing heavily on the rental market as well. Despite steady rental demand, the average rentals grew by a marginal two percent in Jul-Sep 2019 as compared to Jul-Sep 2018. 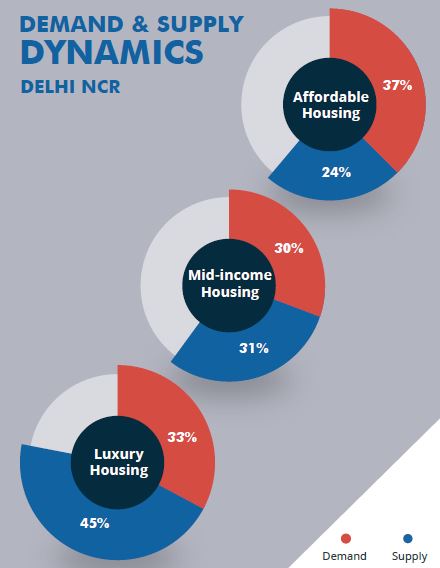 With over 2,000 projects under construction in Noida and Greater Noida, the segment remained snubbed by homebuyers due to a growing number of builders filing for insolvency. As many as one lakh units are reportedly stuck in Greater Noida, followed by Noida with over 44,000 delayed units. The cautious buyer stance this quarter also seemed to spill over to the ready housing units after cases of dispute emerged over already delivered projects.

The housing market in Ghaziabad narrated a similar tale with homebuyers deferring purchase decisions in anticipation of a significant price correction or lucrative festive deals. The average prices in the region maintained status quo, QoQ, despite a hike in circle rates in Vasundhara and Siddhartha Vihar.

In line with the previous quarters, Sectors 79 and 150 in Noida saw maximum real estate activity in terms of new launches and property enquiries. Both the sectors saw the capital prices going up by 3-4 percent, each, QoQ. The launch of the Aqua metro line in the preceding quarters, too, played a significant role in firming up property prices in these regions. In Ghaziabad, Vaishali emerged as the top performer with a three percent uptick in capital prices, QoQ.

While property enquiries maintained status quo in Gurgaon this quarter, transactions dipped significantly as homebuyers took a back seat amid the slowing economy. The average weighted capital prices in the region reported a marginal uptick of one percent in Jul-Sep 2019, against the previous quarter. However, the positive price movement is largely attributed to an artificial hike created by the builder-broker community despite a looming inventory of over 56,000 units.

Housing demand continued to concentrate along the transit corridors such as Golf Course Extension Road, Dwarka Expressway
and Sohna Road. New launches, too, remained restricted to these pockets. The quarter saw the addition of around five new
projects in the city. New Gurgaon reported healthy traction from potential homebuyers; however, an unabsorbed inventory of close to 25,000 units enabled buyers to exercise hefty negotiations.

Faridabad, surprisingly, took the lead in new project launches. Of the nine projects added this quarter, majority fall in the mid-income segment, the most popular budget category in the region. Property sales, however, remained meek as buyers awaited price correction. Areas along the metro line such as Sector 21C, and those in Neharpar such as Ashoka Enclave, Sector 78, 81 and 88 garnered maximum buyer traction.

The rental market in the two zones continued unabated with Gurgaon and Faridabad reporting a four percent and two percent hike in rental values, respectively, YoY.

The property market in the capital city maintained status quo in Jul-Sep 2019. While sales volume remained unchanged, the average weighted capital values reported a marginal one percent uptick, QoQ. Dwarka continued to be the bellwether of all real estate activity in the city.

Connectivity by the metro, proximity to Gurgaon and availability of affordable residential stock remained the best-selling propositions for the area. Sectors 8, 17, 19 and 22, topped the capital charts in Jul-Sep 2019 with 2-3 percent surge in average property prices. The recently opened Dwarka-Najafgarh corridor of the Delhi Metro (Grey Line) has transformed the Dwarka metro station into an interchange facility, further boosting the reach of the location.

The expanding reach of the Delhi metro also helped locations like Dilshad Garden, Mayur Vihar-III and Shahadra in the East, Ashok Vihar in the North, Malviya Nagar, and Lajpat Nagar II and IV in the South clock capital appreciation to the tune of 3-4 percent, QoQ. With the Delhi Development Authority (DDA) approving the Transit Oriented Development (TOD) Policy, all the locales in proximity to the metro corridor stand to benefit in the forthcoming quarters.

Unsold inventory stood at around 12,300 units in Delhi, the lowest in the National Capital Region. However, the looming disparity in demand and supply of housing units made revival difficult for the city. Despite an unmet demand for homes priced within Rs 60 lakh, the authorities failed to dispose the newly launched affordable housing stock. Resultantly, the State government was forced to sell the low-cost units in Narela at a discounted price. Amid a slowdown in buyer activity, the rental market garnered robust traction, resulting in a two percent hike, YoY.