Construction bans in Delhi NCR, first due to high pollution levels, followed by the Aravalli Hills’ dispute and then finally because of the 21-day nationwide lockdown to contain the spread of COVID-19, impacted the pace of ongoing projects in the city. Developmental work across 4.25 lakh under-construction units have been stalled with the construction cycles getting delayed by an average of 2-3 quarters. An elongated delay in project deliveries might result in cost escalation and penalties for developers. Most of these projects were launched between 2013 and 2019.

After acquiring the last 18.5 hectares of land for the first phase of the Jewar Airport project, the Uttar Pradesh government allotted a corpus of Rs 2,000 crore for its development. With around 1,334 hectares of land already acquired and handed over to the Yamuna Expressway Industrial Development Authority (YEIDA), the project is expected to become operational by 2023.

In a bid to bring market and circle rates at par, the Greater Noida authority spiked residential land rates by 13-40 percent. Contrary to this, commercial plot rates were reduced to Rs 44,250 per sq m from Rs 46,190 per sq m. This was met by a revision in the registration fee, which has now been fixed at one percent for all residential properties.

In anticipation of the election results in February, homebuyers adopted a wait-and-watch approach and held purchase decisions. Resultantly, sale conversions in Delhi remained low until the first half of February.

The Jan-Mar 2020 quarter was marked by several distractions for the real estate market of Delhi NCR. Starting with partial construction ban due to high pollution levels in the beginning of the quarter to Delhi elections in February, which slowed down site visits, and eventually the nationwide lockdown in March, housing demand remained under pressure throughout. Delhi NCR consequently reported 10-20 percent dip in sales volume in comparison to the previous quarter. Developers who deferred new launches and discount deals and saved them for first festive season of the year in March had to defer their plans as the outbreak of Coronavirus initially disrupted site visits and eventually brought all deals and transactions to a standstill.

The premium housing market took the maximum hit with sales dipping by 20-25 percent at the beginning of March alone. Affordable homes priced within Rs 45 lakh continued receiving enquiries even amid the lockdown period.

On the upside, the slowdown in new project launches could help reduce the time required to offload the existing unsold inventory of around 44 months. Similar to the studied quarter, when average property prices have remained unchanged, QoQ, the consequent months might also see prices stagnating due to availability of excess housing stock. The rental market, too, showed a dismal one percent growth, YoY. While Delhi saw the maximum hike of three percent in annual rents, Ghaziabad led all zones in terms of rental yield, which stood at around 3.14 percent.

Despite increasing property enquiries, sale conversions in Noida, Greater Noida and Ghaziabad remained low-key in Jan-Mar 2020. Transactions in the primary market dipped to almost one-fourth of its usual as Noida started reporting COVID-19 positive cases. Developers continued innovating marketing and consulting techniques to keep the potential homebuyers engaged, even though they deferred all new launches and discount deals for the time being.

The under-construction segment garnered reasonable enquiries; however, majority sales happened in the readyhomes category. Demand for affordable homes, especially those identified under Pradhan Mantri Awas Yojana, went up considerably. An unmatched increase in the supply of homes priced within Rs 40 lakh led demand to exceed the former by 20 percent. Greater Noida remained the hotspot of affordable homes as majority demand surfaced in Knowledge Park V and Sector 10, Greater Noida West.

Average weighted property prices in Noida, Greater Noida and Ghaziabad remained unchanged in Jan-Mar 2020. Developing Sectors in Noida, such as 118, 128, and 150, and established popular areas like Sectors 73 and 79 reported the maximum increase of two percent, each, in average capital prices, QoQ. In Ghaziabad, Pratap Vihar, Gyan Khand 2, and Kaushambi took the lead with 2-3 percent uptick in prices, QoQ. The surplus residential stock also kept a check on the rental rates, which remained unchanged in Noida and Greater Noida, and dipped by two percent in Ghaziabad in the last one year. The three zones, however, led all other zones in Delhi NCR with respect to rental yield, which stands at 3.14 percent in Ghaziabad, 2.83 percent in Greater Noida, and 2.78 percent in Noida.

Market sentiment in Gurgaon remained neutral in the first two months of the quarter. Dwarka Expressway and New Gurgaon continued to be the hotspots for both new launches and sales in Jan-Mar 2020. South Gurgaon or Sohna also emerged as a popular housing destination with several new projects in the pipeline with homes priced up to Rs 60 lakh.

Overall, Gurgaon led all zones in Delhi NCR with respect to sales and new launches, with 60 percent and 40 percent share, respectively. However, starting March, sale enquiries, transactions and construction activities suffered a setback amid COVID-19 health crisis. In Jan-Mar 2020, the city saw an addition of four new housing projects. New transactions and launches are expected to happen in the next quarter now. The slowdown in release of new inventory may auger well for the city’s unsold inventory, which stands at around 56,000 units.

The demand for under-construction units, although on a gradual rise in Gurgaon and Faridabad, may suffer in the subsequent quarters. Of the 4.25 lakh delayed units in Delhi NCR, over 1.12 lakh fall in Gurgaon and about 14,000 in Faridabad. This, however, may boost the rental market in the two cities, which has posted a marginal one percent rise, YoY.

While property prices remained stable this quarter, buyers expect a price correction in the short-to-mid term. The plot rates are expected to go south. The premium housing market may also witness a setback, since risk-averse buyers may take at least another quarter to return to the buying forefront. In the luxury landscape, Golf Course Extension Road continued garnering maximum traction in the studied quarter.

Property prices in Delhi failed to see any revision in Jan-Mar 2020 against Oct-Dec 2019. A number of factors including the State elections and the subsequent outbreak of COVID-19 made people defer their home buying decisions.

Construction of over 33,000 under-construction units, which was already delayed due to the three-monthlong construction ban imposed on account of the rising pollution, was further hampered by the lockdown.

With the deferment of new launches to the next quarter, Delhi closed Jan-Mar 2020 with a single new project launch in Vasant Kunj. Going by the past trends, most new launches in Delhi have been concentrated in either South Delhi or in the far-flung areas such as Narela, primarily catering to the low-income segment homebuyers.

Affordable housing continued to take centre stage in Delhi, which was evident from the notable 10 percent hike in demand for such homes. Despite the rising number of enquiries, transactions remained low. Excess inventory amid poor offtake forced the Delhi Development Authority (DDA) to reduce the prices of apartments in its housing schemes launched earlier. Paradoxically, the development of another 5,000 units in Jasola, Dwarka and Narela under DDA’s Housing 2020 is in the offing.

Unlike all metro cities, Delhi NCR showcased muted home buying sentiment in the first two months of the quarter. Multiple factors, including the State elections in Delhi, inclination towards other taxsaving instruments, and eventually the outburst of COVID-19 restricted home sales. The quarter closed with minimal new launches and a looming uncertainty regarding the completion of under-construction projects. The revival will depend on pro-industry measures announced by the government. Key micro-markets in Gurgaon are expected to see the quickest come back owing to many projects nearing completion. 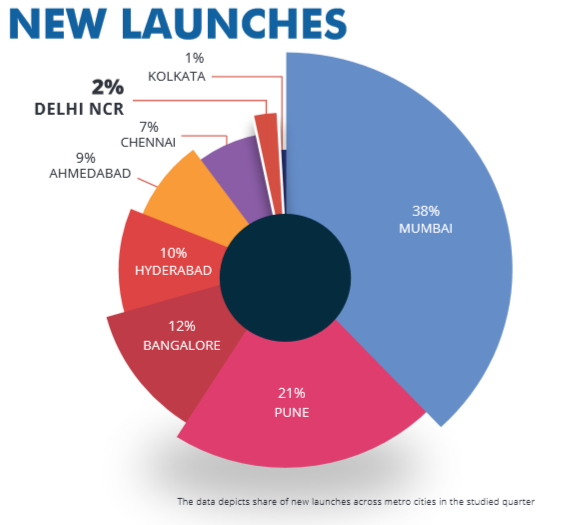