99ACRES' OUTLOOK
Residential launches showed a downward trend as builders concentrated on reducing unsold stock in Oct-Dec 2019. Bangalore captured 12 percent of the total inventory launched across metros, denoting a three percent dip, QoQ. With 65 percent of the total 54 projects launched in South and East Bangalore, the zones continued to be developers’ preferred choice. 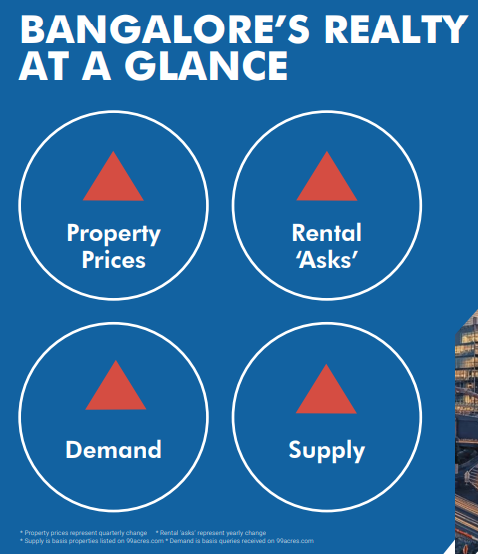 The city held nearly 70,000 unsold units at the beginning of October 2019 and might take 4-5 quarters to get absorbed. Homebuyers’ preference inclined towards ready 2 BHK and 3 BHK units priced within Rs 40-60 lakh. However, an eight percent supply deficit in this budget bracket led to a downfall in sales in the studied quarter. Near completion units and new launches at a higher rate resulted in a negligible hike of a percent in average capital values, QoQ. On the other hand, the average rental ‘asks’ reported an uptick of two percent, YoY.

Improved policies and infrastructure growth along the IT corridors gave steam to the trend of co-working spaces. With an office space absorption of 7.8 million sq ft in Q3 2019, the city topped the Asia Pacific region, reporting a growth of 17 percent in office lease rates, YoY.
The lag in the implementation of Smart City projects and a delay in land acquisition for Namma Metro marred market sentiment. Going forward, planned infrastructure projects and a rise in office space consumption are anticipated to act as realty growth catalysts for the city.

In a market characterised by a few project launches, East and South Bangalore topped the popularity charts amongst buyers and developers. The micro-markets of Varthur, Budigere, Kadugodi, Bannerghatta and Sarjapur witnessed the maximum number of new residential projects in the budget segment of Rs 60 lakh – Rs 1.2 crore.

Capturing 65 percent of the housing demand, affordable and mid-income segments continued to rule the roost. With an oversupply of about 30 percent in premium and ultra-premium housing categories, the segments kept vying for buyers. The disequilibrium in demand-supply across budget segments prevented quick closures from homebuyers. 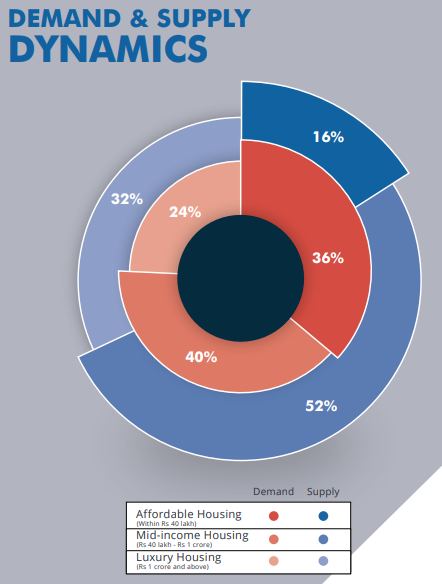 A few micro-markets of eastern and southern belts, such as Hulimavu, Brookefield, Kundalahalli and Bannerghatta, clocked a price rise of four percent, each, QoQ. RT Nagar in the North also scored four percent hike in average capital values. On the other hand, HSR Layout in the South and Vidyaranyapura in the North saw the maximum dip of five percent each in property prices, QoQ.

The demand for rental accommodations grew in Gottigere in South and posted growth in ‘asks’ by nine percent, YoY. It was closely followed by Akshaya Nagar and Panathur with an eight percent surge in rental values in Oct-Dec 2019 vs Oct-Dec 2018. Other micro-markets, such as Yelahanka, Billekahalli, Cooke Town, Cox Town, Kadugodi and Frazer Town, recorded a hike of seven percent, each, YoY.

Bangalore’s realty exhibited meek revival in the festive quarter of Oct-Dec 2019. Homebuyers continued to take a cautious stance due to the economic slowdown, thus, limiting the sale conversions. While East and South Bangalore housed the maximum share of new launches, the northern belt, which is well-connected through roads and railways, is gradually becoming the next residential hub with planned launches in the ensuing quarters. Real estate growth in Bangalore, like other metros, heavily depends on the inclusion of pro-buyer policies in the Union Budget 2020-21. Timely completion of infrastructure projects will also play a key role in boosting the city’s residential real estate in the long run.