Karnataka RERA has drafted a proposal to grant judicial rights to the authority to expedite the dispute resolution process between builders and buyers. In another move, the authority has set up a conciliation forum to enable out-of-court settlements by referring cases to an adjudicating officer.

Following the successful trial runs, the two metro corridors under the Phase 2 of the Namma Metro, Yelachenahalli Road to Anjanapura Township and Mysore Road to Kengeri would become operational from August and November this year, respectively. In addition, the metro authority acquired 93,000 sq metre land parcel on Bellary Road for the development of the elevated Metro corridor connecting Kempegowda International Airport.

Tax burden to increase on homeowners

The civic body has planned to levy Land Transportation Cess on all the property owners in Bangalore. The owner will bear the additional tax burden of two percent from April 2020 onwards. The proposed cess would be utilised for various urban infrastructure projects such as roads, drains, and installation of streetlights at different locations across the city.

The State amended the Land Reforms Act to allow companies to sell their land parcels with the condition that the entity is on the verge of collapse and require assets for debt settlement. However, the company can dispose of their land only after seven years of acquisition. In addition, the State has proposed to introduce a process under the Act to procure agricultural land easily for setting up industrial projects. 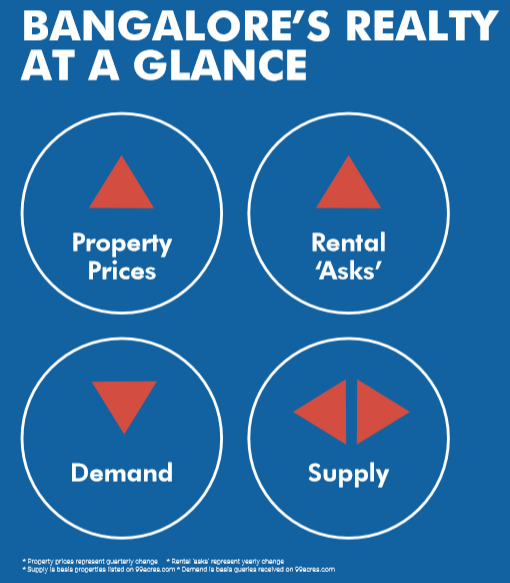 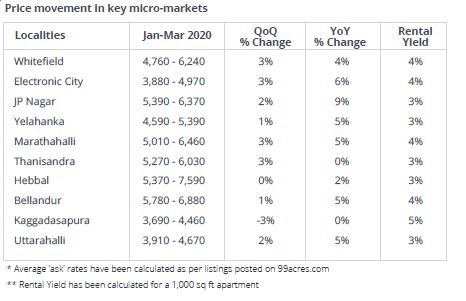 Bangalore garnered steady flow of property enquiries in the first two months, however, sales remained meek in the quarter due to the economic slowdown. With the Government advisory of nationwide lockdown during coronavirus outbreak, site visits and enquires came to a sudden halt but a share of prospective homebuyers continued their search online in March 2020. The first quarter of 2020 resultantly reported a negligible hike of a percent in the average property prices in Bangalore.

Grade A developers curtailed new launches. However, Grade B and C builders entered the market with properties priced within Rs 45-60 lakh. The city recorded nearly 80 new housing projects, denoting a surge of about 45 percent, QoQ.

Properties priced around Rs 60-70 lakh drew almost 70 percent of the housing demand against a 30 percent deficit in supply. Ready housing units remained the first choice of homebuyers; however, limited supply in the preferred budget category shifted a share of buyer interest to the under-construction segment. Land parcels within Rs 15-35 lakh also garnered investors’ attention in the neighbouring areas of Devanahalli and Sarjapur.

With construction activities and sales coming to a halt owing to coronavirus lockdown, developers would struggle to manage their cash flows and to deliver ongoing projects timely. A few of the developers have also planned to organise virtual site visits to overcome the impact of COVID-19 in the ensuing months.

Out of 80 new launches in the budget segment of Rs 45-60 lakh, South Bangalore garnered the maximum share of around 40 percent. It was followed by East and North Bangalore in areas such as Varthur, Hoskote, Kodigehalli, Yelahanka, Devanahalli, and Horamavu.

About half of the tracked locales reported an increase in property prices on account of ambitious ‘asks’. Some of the residential hubs, such as Bommasandra, Bannerghattaand Hulimavu in the South, and Hormavu and Budigere in the North, topped the popularity charts and bagged four percent hike in property prices, each, QoQ. The remaining localities clocked a capital growth of 1-3 percent, QoQ.

The city recorded a steady volume of enquiries in the first two months of the quarter, only to take a hit in March following the COVID-19 outbreak. A few residential areas in the North and East zones, such as Jakkur, Yelahanka, Whitefield, Sarjapur and Marathahali, bagged maximum enquiries for properties priced within Rs 65-90 lakh.

The residential rental market remained upbeat and recorded a spike of three percent, YoY. Some localities such as Ulsoor, Brookefield, Rajaji Nagar, Kammanahalli, Uttarahalli, Cox Town, Frazer Town and BTM Layout, witnessed average rentals going north by nine percent, each, in Jan-Mar 2020 against Jan-Mar 2019. The growing demand of co-living homes and greater accessibility to workplaces led to the aforementioned growth.

Several pro-industry measures, including lower home loan interest rates, were counter-balanced by the impact of COVID-19 in Jan-Mar 2020. Despite a steady flow of enquiries till February 2020, the city did not record any substantial growth in real estate transactions in Jan-Mar 2020 over the previous quarter. The COVID-19 crisis added to the existing liquidity crunch for the builders. Developers might refrain from launching new projects in the coming 2-3 quarters and focus on timely completion of their ongoing projects once the country is out of the health crisis. Some developers may also introduce innovative and aggressive marketing strategies, such as digital project launches and virtual site visits, to regain the interest of potential homebuyers and prepare themselves for a comeback.