About 948 real estate projects registered under RERA have missed their completion deadlines, severely marring the market sentiment. Developers of about 220 projects have applied for an extension. The regulatory body has planned to serve notices to the defaulters, who have failed to update the information online.

Infrastructure projects in the pipeline

The civic body has planned to equip 20 roads with features such as smart signalling, intelligent parking systems, smart trash bins, digital information boards, and light-controlled crossing for pedestrians. Also, elevated corridors covering about 88 km and 500 raised crosswalks at over 300 locations will be constructed across Bangalore to prevent accidents and reduce traffic congestion.

The acute water shortage has led the State to propose a five-year ban on the construction of high-rise buildings. In another move, the water board has decided to reduce the Cauvery water supply for the residential properties, which do not comply with rainwater harvesting and sewage treatment system.

Property values in Bangalore reported a marginal one percent increase in Apr-Jun 2019 vs the previous quarter. The ongoing water crisis, and inordinate delays in metro land acquisition deals and completion of RERA-approved projects impaired the market sentiment. Nevertheless, residential and commercial owners welcomed the announcement of unchanged property tax rates.

Owing to the General Elections and the revised GST regime, the city witnessed a dip in the new launches in the studied quarter vis-à-vis Jan-Mar 2019. The demand for the under-construction units also remained stagnant. On the supply side, Category A developers launched a few projects in the mid to premium segment, i.e. Rs 60 lakh – Rs 1 crore. The quarter also saw a few re-launches in compliance with RERA and building norms such as rainwater harvesting systems.

Affordable homes still hold one-third share of the total demand which outweighs supply by 20 percent. The city has an inventory overhang of around 70,000 units. Hoping for high sales in the ensuing quarters, developers have rolled out attractive offers such as subvention schemes. 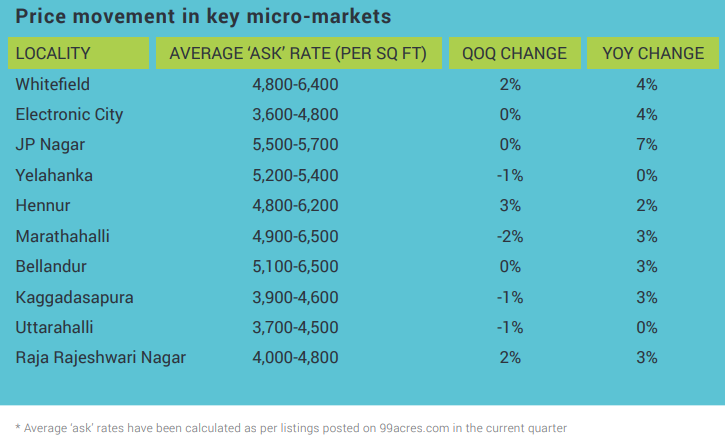 Various infrastructure projects and expanding metro connectivity along with the reduction in GST and home loan rates helped the residential landscape of Bangalore to recover in the second quarter of 2019, although marginally. Overall, the average weighted capital values registered a minimal hike of one percent in Apr-Jun 2019 vis-à-vis the quarter ending March 2019. The rental market, on the other hand, grew at the rate of two percent, YoY. 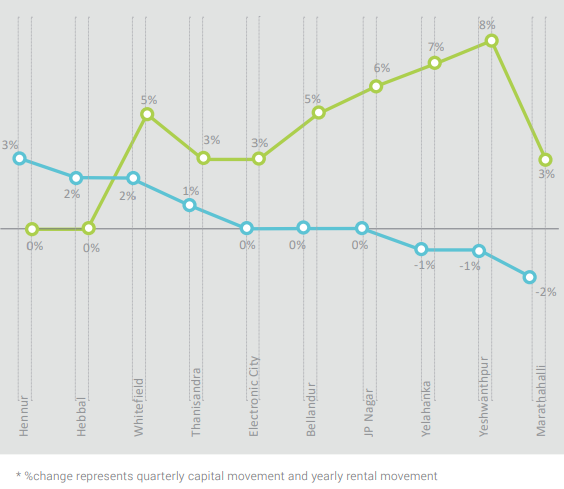 Ready homes remained the preferred choice with about 65 percent of the demand lying within Rs 60 lakh budget segment. The gap of 26 percent in the supply kept the price points under check. However, developers continued to launch new projects in the mid to premium segment, widening the demand-supply disparity in the city.

Localities such as Vidyaranyapura, Sahakara Nagar, Hegde Nagar and Sanjay Nagar in the North; and Basavangudi, HSR Layout and Singasandra in the East witnessed the maximum price appreciation to the tune of four percent, QoQ. The average capital values in JP Nagar remained stagnant in the studied quarter but bagged a seven percent growth, YoY, and currently stand around Rs 5,690 per sq ft.

The popular micro-markets of Whitefield, HSR Layout and Bellandur continued to witness price appreciation by 2-4 percent, QoQ, despite restrictions imposed on Cauvery water supply. These localities have been relying entirely on tank water for a few quarters now.

The rental landscape continued on the growth trajectory owing to the expansion of the commercial market, improved connectivity and proximity to IT hubs. Rajaji Nagar in West Bangalore posted an eight percent surge in ‘ask’ rates in Apr-Jun 2019 vs the same quarter last year. The localities of North and East zones such as Doddanekundi, Malleshwaram, Mahadevpura and Yeshwanthpur, too, remained popular among the tenant community, clocking an eight percent hike in lease rates, YoY. 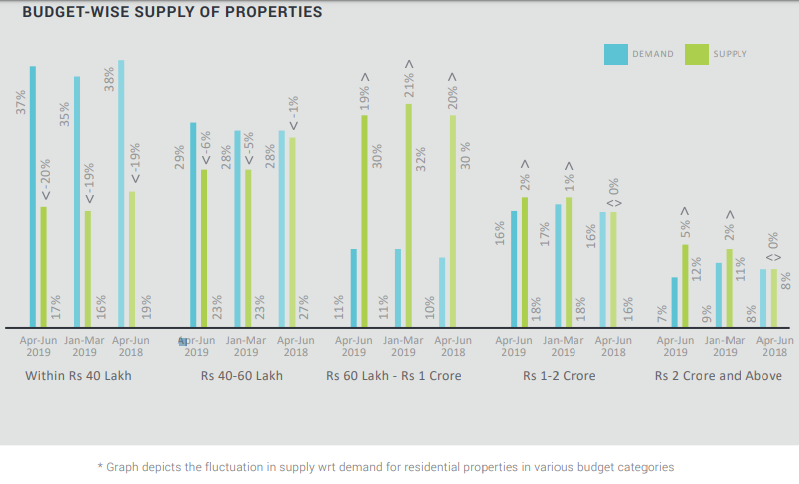