Loans from NBFCs witness a sharp decline in Gujarat

Disbursement of home loans by the NonBanking Finance Companies (NBFCs) declined by 27 percent in Gujarat, from Rs 18,640 crore in FY 2017-18 to Rs 13,579 crore in FY 2018-19. While no disbursals were made to new borrowers, the existing borrowers failed to utilise the incentives provided to them as part of their existing loans. Unavailability of credit continued to hit the market and pose challenges for the real estate sector in the quarter.

The delay in completion of the tunnel work up to Gheekanta further impeded the progress of the Vastral APMC-Kalupur stretch of the metro line, delaying the completion of the entire stretch by nearly two-three months. Moreover, the track from APMC Vasna to Motera might also witness a delay until Diwali next year, restricting development activities along the corridor.

In a bid to revise the city limits by 2019-20, the Gujarat government has directed the Municipal Commissioners to send their proposals for including the outgrowth areas within the Municipal Corporation limits. The decision is expected to open new growth prospects for regions such as Bopal, Ghuma, and Sanand, which have been long demanding inclusion in the Municipal limits.

Infrastructure development on the cards

Giving a boost to infrastructure development in the city, the Mandal-Becharji Special Investment Region (MBSIR) project has been identified as a priority project and its development will be soon accelerated. The project is likely to generate about 4.2 lakh job opportunities. In another development work, Ahmedabad Municipal Corporation (AMC) has initiated the redevelopment of Anandnagar Road, which is likely to put an end to the traffic woes, benefitting the residents at large.

After the sale of over 6,700 units in Jan-Mar 2019, Ahmedabad’s realty market displayed some signs of revival in Apr-Jun 2019. The slowdown in enquiries and property transactions triggered by General Elections and ambiguities pertaining to the revised GST regime seems to have dwindled now. Noticeably, the city witnessed a few prominent project launches this quarter, in both residential and commercial segments. Nearly half of the residential launches were in the affordable segment. Of all the projects registered under Gujarat RERA, over 33 percent of homes were priced within Rs 50 lakh. Most of these projects are concentrated in areas such as Shilaj, Gandhinagar, Chandkheda, Odhav, Tragad, and Narol. Launches in the commercial segment were restricted mainly to the western region.

Over 70 percent of the demand in the city remained inclined towards 2 BHK and 3 BHK units priced within Rs 50 lakh. The positive home buying sentiment, especially post the election results; however, could do little to bolster the average property prices in the city, which maintained status quo, QoQ. Taking account of the increased momentum, the unsold inventory levels scaled down from 14,000 in Jan-Mar 2019 to 11,000 in Apr-Jun 2019.

Select areas along the Ring Road such as Shela, Bopal, Nikol, Narol, Shilaj, Vatva, and Vaishnodevi remained the popular investment zones. As the buyers attested their affinity for affordably-priced units, inventory priced above Rs 1 crore continued vying for demand. Despite a restricted number of new launches in the commercial segment, the sector continued to struggle for occupiers, resulting in higher vacancy levels across the city, except near Sarkhej-Gandhinagar (SG) Highway.

Marked by an improved number of enquiries and sales, the housing market of Ahmedabad narrated a happier tale in Apr-Jun 2019 as against Jan-Mar 2019. Property prices, however, remained unchanged through the quarter. Going ahead, various planned and unplanned infrastructure projects such as revamping of the Sardar Patel Ring Road and the construction of six new flyovers across the city could spur realty growth in the forthcoming quarters.

Localities in the East and around the SG Highway witnessed maximum buyer traction. Affordable areas such as Bopal, South Bopal, and Shela emerged as the bellwethers with a three percent hike in the average capital values, each, QoQ. Competitively priced units, proximity to SG Highway and Sanand, a prominent industrial hub in Ahmedabad, catalysed growth in these localities. Brimmed with a plethora of projects from Grade A developers, South Bopal, too, recorded an appreciation of three percent in the average asks, QoQ. Capital values in South Bopal hover around Rs 3,400-4,600 per sq ft.

Following suit, Jagatpur and Narol clocked a growth of two percent each in the quarter ending June 2019 versus the previous one. While the former is a sought-after locale for those working between the stretch of Gandhinagar and Prahlad Nagar, especially the localities surrounding SG Highway, the latter is a preferred destination for the working populace of Vatva. Some of the other micro-markets that witnessed positive price movement, albeit marginal, include Motera, New Ranip, Prahlad Nagar, and Bodakdev.

The rental market in Ahmedabad reported a two percent increase in the average ‘asks’, YoY. Of all the localities, Vasna, Motera, and Bopal held the baton of progressive rental charts, reporting a massive surge of eight percent in the average rental rates. While a 2 BHK unit in Vasna is available for Rs 10,000-15,000 per month, a similar unit in Bopal can be rented for Rs 15,000-18,000 per month.

Localities such as Naranpura, Gurukul, and Sargasan recorded rental growth of seven percent each, YoY. Competitive rentals along with the presence of adequate infrastructure drove healthy traction to the localities. 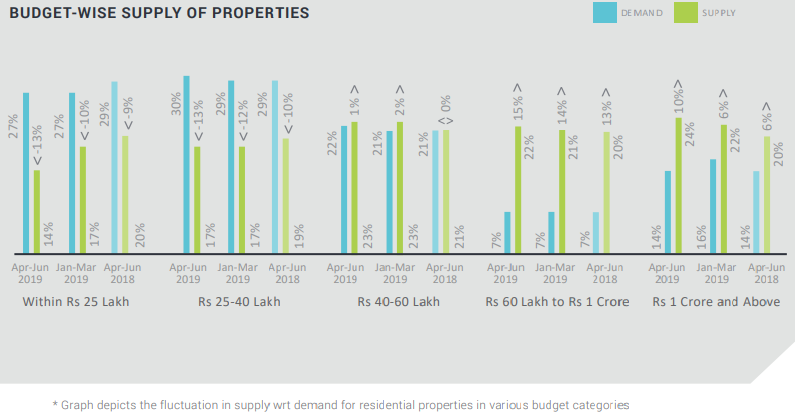