The net rental yield in Kolkata stood at 3.75 percent in Jan-Mar 2020, as per 99acres Insite Report. With this, the city leads all metros in terms of generation of rental income. We take a look at some of the top localities with high rental yields that were majorly responsible for the city’s optimum rental statistics.

The rental landscape of Kolkata has always been a hotbed for phenomenal real estate traction and the Jan-Mar quarter’s 99acres.com Insite Report is a great indication of this continued trend. As per the report, Kolkata delivered a net rental yield of 3.75 percent, one of the highest across metro cities in India. The city also clocked a yearly hike in average rentals to the tune of two percent. High-end localities of south Kolkata such as Tollygunge and Narendrapur witnessed a hike of nine percent in rental rates YoY, which is massive in comparison with neighbouring localities.

Additionally, localities such as Lake Town, Mukundapur, Ballygunge, Gariahat, Kalikapur, Patuli, Madhyamgram, Kasba and Salt Lake witnessed a rental growth of six to eight percent, each, YoY. The highest rental yield of five percent was witnessed in Kestopur and Bansdroni, while localities such as Rajarhat and Garia managed a four percent rental yield. Let us examine the top five rental localities in Kolkata based on these trends:

Bansdroni accounts for a massive rental yield of five percent, which is the highest in Kolkata. This area witnessed an appreciation of 7.2 percent in rental ‘asks’ from the same quarter in 2019. Among the available rental accommodations here, over 60 percent are 2 BHK variants, with the rest equally divided among 1 BHK and 3 BHK configurations.

Bansdroni is well connected to southern employment hubs along the Netaji Nagar-Garia belt via the Netaji Subhash Chandra Bose Road. The Masterda Surya Sen Metro Station helps expedite the office commute from this locality. With the mushrooming of several housing complexes, the property prices in the area have almost doubled in the last five years.

Kestopur, along the lines of Bansdroni, has proven to be a lucrative locality for investment in the rental homes market, posting a five percent rental yield for the Jan-Mar 2020 quarter, according to the 99acres.com Insite Report. With double the number of rental options compared to the former locality as per 99acres.com listings, this area managed a yearly rental movement of four percent.

The commercial hubs of New Town and Salt Lake are situated within a radius of 8 km from Kestopur and are accessible via the Thakdari Road. This artery recently went through a facelift with other segments along the Salt Lake Sector V-Basanti Highway stretch, vastly improving the daily commute. A new bridge over the Kestopur canal connecting New Town and Salt Lake is in the works and is expected to shorten the commute between these employment hubs.

This northern Kolkata township situated in the Biddhanagar Municipal Corporation boasts of a four percent rental yield and a four percent appreciation in rental ‘asks’, YoY, for the Jan-Mar quarter. VIP Road connects this locality to neighbouring commercial and industrial hubs of Dum Dum, New Town and Krishnapur. Baguihati is also a reputed export-import hub majorly employing the lower middle class strata, which is why it is populated by affordable rental accommodations starting at Rs 4,500 per month for 1 BHK, Rs 6,000 per month for 2 BHK and Rs 10,000 per month for 3 BHK variants.

The recently refurbished four-lane flyover connecting EM Bypass to VIP Road ensures that traffic snarls near Baguihati are to a minimum. The closest metro station to this locality is the elevated Dum Dum Metro Station on Line 1. This locality is an emerging school district with several schools such as Calcutta High and North Point Sr Sec School located along VIP Road.

Rajarhat witnessed a 7.6 percent appreciation in rental ‘asks’, YoY, and recorded a rental yield of 4.05 percent as per the 99acres.com Insite Report for the Jan-Mar 2020 quarter. This locality has one of the highest concentrations of rental accommodations in Kolkata, and mostly in the 2 BHK format, for rental ‘asks’ between Rs 8,000-12,000 per month, and in the 3 BHK configuration, for a monthly rental ‘ask’ of Rs 13,500-17,000.

The West Bengal Housing Infrastructure Development Corporation (WBHIDCO) is trying to develop Rajarhat into a futuristic smart township with the setting up of Eco Park, Fintech Hub and so on as the initial steps towards this endeavour. As of now, this locality is a thriving base of IT activities with companies such as Wipro, TCS and IBM set up here. With the completion of Line 6 of the Kolkata Metro in 2021, this commercial hub will enjoy superior connectivity as well.

“Rental accommodations in Rajarhat command quite reasonable ‘asks’, despite the ever-mounting demand for the same. The highest volume of enquiries in this area is from young migrant IT professionals for 1 BHK apartments which go for monthly rents of Rs 5,000-10,000, varying based on carpet area. There are many prestigious projects here that are in different stages of completion. Some units in these projects have already been bought and listed for renting,” avers Prashanta Dasgupta, property consultant, Magnolia Realty.

This locality boasts of some of the steepest capital and rental ‘asks’ in all of Kolkata and witnesses consistent price appreciation. The Jan-Mar 2020 quarter witnessed a rental appreciation of 7.4 percent, YoY. With the steep monthly rental ‘asks’ such as over Rs 15,000 for 1 BHK, all the way to nearly a whopping Rs 52,000 for a 3 BHK, this locality posted an impressive rental yield of 3.51 percent.

One of the reasons for the locality’s popularity is its preference among upwardly mobile parents looking for top-notch educational facilities. Modern High School and South Point High School of Ballygunge repeatedly rank among the top secondary educational institutions of Kolkata. Additionally, superior connectivity due to the essential artery that is Shyama Prasad Mukherjee Road as well as the nearby Kalighat Metro Station add to the real estate potential of this posh neighborhood.

The above localities in Kolkata have performed phenomenally in terms of rental movement in the Jan-Mar 2020 quarter, despite the slowdown from the COVID-19 lockdown. Owing to planned civic infrastructure developments and Metro lines in the pipeline, these numbers are expected to keep up.

Rules and regulations for buying a home in Jammu and Kashmir 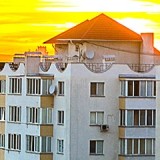