Get to know more about NaupadaView Locality Insights
Owner
Verified
Under construction
Ready To Move
With Photos
Sort By
Verified
This property has been verified on location by our team Learn more
2 people viewed this property this week
Posted on 13th Dec, 2021 by RERA Registered Dealer
Arnav Properties
Share Feedback
Hide
Shortlist

Reviews for Naupada, Mumbai Thane
Read what locals have to say...

Points to Consider
for Naupada Location
What's great here!
Situated advantageously alongside the Eastern Express Highway
Majority of residential apartments available for sale in Naupada are ready-to-move
Commercial units in Airoli are located only 8.5 km from away the locale
Thane Railway Station, a major station handling over 1,000 trains daily, is only 1.3 km away from Naupada
Naupada is situated close to Wagle Industrial Estate (four km) and Bhandup Industrial Area (6.1 km)
Naupada is a popular retail hub in Thane
Naupada offers premium residential units than its neighbouring localities - Kopri and Tambe Nagar
Two parking lots with a total capacity of 4,200 vehicles have recently been built around Thane Railway Station
Naupada is mainly served by LBS Marg, Mahatma Gandhi Road, Shivaji Path, and Gokhale Road
Top schools in and near Naupada are Saraswati Trust Mandir Primary School and Orchids International School (7.6 km)
Talao Pali Lake in Naupada is a popular tourist spot in Thane
Horizon Hospital and Dr. Godbole's Heart Care Hospital are two prominent medical institutions in Naupada
Naupada adjoins the other popular hubs such as Teen Hath Naka, Kopri, and Panch Pakhadi
What needs attention!
Slum clusters in Chikhalwadi and other areas in the locale negatively affect housing demand
Naupada has one of the highest numbers of old buildings in unsound and dangerous conditions in Thane
Low water-supply pressure in Naupada on some days of a week due to overall cuts in Thane's water supply
Traffic jams noted on Eastern Express Highway and some internal roads of the locale
Nearest metro access is via Ghatkopar Metro Station, which is as far as 15 km from the locale
Commuters suffer from potholes on some internal roads in the locale
Some areas in Naupada witness water logging during monsoons
Common Mentions
Based on 13 reviews
Positive Mentions
Good Hospitals are nearby
Easy Cab/Auto Availability
Good Public Transport
Well-maintained Roads
Safe at Night
Good Schools are nearby
Read Points to consider 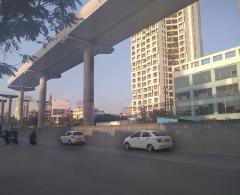 Naupada, Mumbai Thane
4.5/5
based on 13 Reviews
View Locality Insights
Ratings by Features
Connectivity
5 out of 5
Environment
5 out of 5
Lifestyle
5 out of 5
Safety
4 out of 5
4
★

The area is nearer to Thane Railway

Station. The area is one of the oldest and prime spot in Thane. Everything is available in this area. There are hospitals nearby, schools, no problem of public transportation. Some Good shops, restaurants, Banks & more. Naupada is on of the oldest part of Thane. Almost everyone knows this area who lives in Thane. Police station, salons, Beauty parlours, almost all the Branded shops are in this zone.Show More
Former Resident | Posted 10 months ago
5
★

Station is a 5 min walk. It makes y

our travel easy for inter city and also inter state. Lots of variety and choices available when its about shopping. Thane city main vegetable market where you can get vegetables in wholesale rate is 5 min walk too. Womens will feel safe to walk on street even at late nights, because the streets are well- lited and also the streets here are never empty. Show More
Owner of Property | Posted 1 year ago
5
★

Naupada-vishnu nagar is best area i

n thane Its nearest to thane station and best area Rates of flats and shops are high but as area is really good Nearest police station is naupada police station and really very safe area in thane.main thing is price is little high but if you want best area than you should not think of price.hotels medical grocery shop station every thing is available near by.metro line is also coming in near by at teen hath naka.good schools are thr.no one in area will say bad thing abt naupada.market is nearest.electricity alws available Show More
Owner of Property | Posted 1 year ago
4.4
★

Everything available at all prices.

Hospitals are with in 5-6kms away,

auto rickshaw are quickly available of any emergency and ambulance is also on time whenever needed. The area connects to highways so easy to travel to different cities. Malls are close to the area aprx 1-1.5km. The groceries are also nearby to area. Even there is Petrol pump in naupada itself so don't have to worry if you go out of fuel. The markets are 2km away which is a whole sale as well as retail Market. In case of fire emergency the fire Brigades are also very responsive which is 3km away, so don't need to worry about that. There are two schools in this area with good education. Show More
AGNESH GADA, Former Resident | Posted 1 year ago
5
★

Naupada is one of the best area in

Every grocery, stationery and also

✅ Are there other localities near Naupada offering 3 bhk apartments for sale?

✅ Does Naupada has 3 bhk apartments in resale?

There are 16+, 3 bhk resale apartments in Naupada. Search using relevant filters and get complete list on 99acres.
Q

✅ Are there any ready to move 3 bhk apartments in Naupada?

Yes, there are 14+, ready to move 3 bhk apartments in Naupada. Explore all on 99acres.com. Sort your search results using important parameters like price and date of posting.
Q

✅ Are there any affordable 3 bhk apartments in Naupada?

There are many 3 bhk affordable apartments in Naupada. Find out for the ones that match your budgets and other search criteria.
Q

✅ Are there any 3 bhk apartments available for sale in societies in Naupada?

There are countless available apartments in different societies. Get a complete list of 3 bhk society apartments in Naupada only on 99acres.
Q

✅ What are the popular 3 bhk residential projects in Naupada?

New projects are a crucial part of Mumbai real estate. Find the complete list of 3 bhk residential projects in Naupada on 99acres.
Q

✅ Are there any 3 bhk new launch residential projects in Naupada?